20 Years Ago, this week I began work on my first Zine, an anthology featuring Jason Sandberg, Zak Sally, and Scott A Dolan. Recently, I was asked by Metro Magazine for my thoughts on zine culture, zines in Minneapolis and the upcoming Twin Cities Zinefest (Saturday, September 24, 2011: 12pm-5pm) Here's what I wrote, an overview of how I got into zines and what it was like to be a self-publisher back in the days before the internet. As a bonus, I've also included the complete contents of Rump #1, a highly-relevant benchmark issue.

Here's a start. Please help with editing and spelling and stuff. I'm a bit of a knucklehead. Anything you'd like me to extrapolate on?

I grew up in Shakopee. Like most small town punks in the 80's, I moved away as soon as I was able (1987). I was lucky. MPLS wasn't far and there was a shit ton of music and lowbrow art happening here ­at the time. Along with, Kevin Cole's late night radio shows on KBEM, the fanzines and DIY mags (Uncle Fester / Your Flesh / Art Police / Losing Faith / Ferret Comix / Baby Split Bowling News / Profane Existence) I would pick up on my sporadic escapes into the big city were the Harlequin™ romance novels to my locked-in-my-bedroom-against-Reganomics-and-rednecks loneliness.

Up til moving to MPLS I worked in a butcher shop. The U of M was a magnet for of outstate DIY'ers. I was a 'fine arts major'. Don't remember much of actually going to class. (only lasted a year and a half). My life revolved around WMMR (now Radio K) (lasted 3 years before my non-student status was discovered) where I met Jason Parker and the THD crowd . Making xeroxed playlists, station newsletters (Hooray for the Devil!) and gig posters with those punks was a hell of a lot more fun than sketching hirsute transient 'models'. I picked up an internship at Twin Tone aback when Am Rep was still squatting there, and started doing posters for the Uptown Bar. It was a pretty inspiring time and fueled my move out of the fine art program and eventually out of school.

I left school with the mission to forget about art and “make toys and draw fucked up shit”.

I spent a lot of time at Kinkos, and figured I'd get an overnight job there to 'facilitate' my practice. I was not alone. Zinesters are night owls. Being a copy connection' I was in the right place to meet the broad spectrum of MPLS DIY publishers, the anarchists and socialists; the cartoonists and the writers. One late night I met Earnest Mann, who had been publishing his amazing double-sided 8 ½ x 11 zine, The Little Free Press for nearly 20 years. (his zine was also freely reproducible. I host a digital version of one of his collections in the Mt. Holly Public Library (LINK). You should put down this magazine or your computer and go read it now.)

I was introduced to fellow Kinko's employees, Joel Orff and Dan Cahil [CHECK SPELLING] about this time. They were publishing a collective comics zine called Marvelous Martha's Comic's. It inspired me, in 1991 to try to put out my own collected zine, Ye Olde Stinkhammer Press (bear with me, grunge was casting a heavy, flannel-draped dude-vibe on everything in those days.)

The music and art scene back then was reeeeeeeaaaaaalllllly small. It was local, close, and because of this, there was a earnest quality to all of it. Remember, this was a time before 'Alternative Radio' and the internet which 'legitimized' saturated, diluted and commoditized art and music. (sorry, folks, I'm old.)

This was a time where one discovered music through reading Maximum Rock & Roll, going to the record store, catching touring bands or grabbing a beer with friends who just got off tour and would regale with stories and swapped records and tapes. The same was true but to a lesser extent with zines.

If you were lucky enough to visit another town, you did so with a 25 cent Goodwill suitcase, jammed with zines and an extra pair of socks. You sold them at shows. You hit every record store in said town, buying every zine in sight and dropping off zines for consignment. Most shops would take 5 copies. At a quarter a pop, after the 60/40 split, it was hardly viable checking back to collect (via a long-distance call over a land-line, remember this was pre-cell phones). Still, occasionally, the envelope full of change would magically appear in the mailbox. But that wasn't the point. The point was to perhaps, through your hard work, or picking up someone else's hard work, connect with another like mind.

The other option was Fact Sheet Five. It was less of a magazine, more of a published lexicon of self-publishing. This thing was a tome; a couple hundred page brick infested with the classified ads for America's publishing underbelly: comic books, music mags, alternative lifestyles, UFO enthusiasm, rampant conspiracy and dissent (yay!), and (barf!) poetry. . . lots of god damned poetry. Shit was cheep; much was open to flat out trade. Most items were shipped with hand-written letters and offers of friendship.

Most of my best friendships, today, were forged via the U.S. Postal System, 20 years ago. It's crazy to think about.

I met Zak Sally while putting together that first xeroxed collection. Within a month of meeting, I finished printing the book including his work and he and I hit the road for the West Coast to ply our wares for two weeks along the Jonestown / Les Thugs tour. We've been friends ever since. We decided to put our books out under the jointly under the La Mano imprint. Zak's the hardest working self-publisher out there. He spends years sweating over a ink and eraser ort riddled desk and shambling printing press to create a understandable yet unfortunately small portfolio of highly detailed, brutally beautiful works of art. I ejaculated my little turds of magazines in 3 hour sessions. We're like Felix Unger and Oscar Madison in a lot of ways. In the past decade, I've become much more of a dabbler. (I slapped together my latest travesty, a zine of dirty jokes written in code called S.E.C.R.E.T.S.H.I.T. That is distributed with a decoder over 2 years ago.) Zak is pretty much the sole driving force behind La Mano at this point. I'm a liability.

Minneapolis has always been a hotbed for DIY publications. Back in 1919 Fawcett Publications was born of a mimeographed pamphlet of bawdy military jokes called Captain Billy's Whizz Bang. Being a hotbed for socialism and the union movement in the 20's and 30's Minneapolis was littered with hand-made propaganda.

As Minnesotans, our penchant for self-publishing stems from many things. We tend to be pretty self-reliant people here. We have to be, given the climate. With self-reliance comes a certain amount of alienation. This alienation was compounded, in the pre-internet world, by our location. Minneapolis was in the middle of nowhere. With a certain amount of alienation, comes the desire to connect, to be heard. We are a culture of makers here. The folks on the coasts would have their mind blown to be made aware of the breadth of Midwest innovation, in engineering for sure, but also in the creative arts. The volume of zines being published here is a natural extension of our history and a response to cold-ass winters and plague-like summers.

The internet has done much to make zines accessible. I would argue that the internet has also superficialized zines, turning them into pretty products more than an exercise in soul rendering. Crap, who am I fooling. I've always felt that way. I'm just old. I still stumble across gold every once in a while. To each his own, right? That's what zines are about. Not pleasing everyone. It's about banging away on something that makes sense to yourself, putting it out there, and hopefully making a connection with a reader. Plus, did I mention I'm old.

Regardless, there is alchemy in zine crafting that is undeniable. And the end result is, for better or worse (remember - poetry mags), highly personal and gloriously tactile. There is no better venue, today, for getting jumped-in to the zine culture than zinefest, where you can pick up and read from a huge swath of today's MPLS DIY publishers. 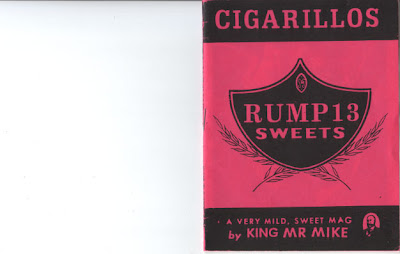 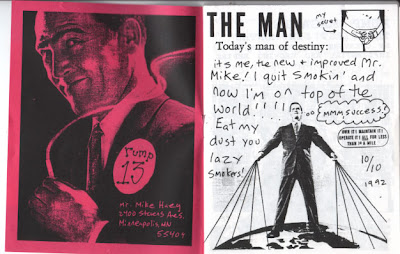 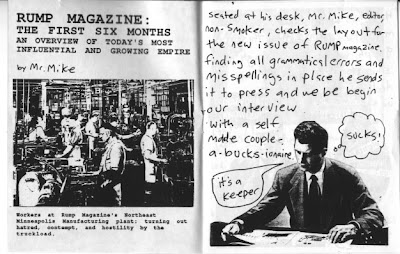 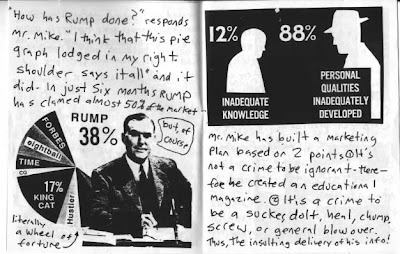 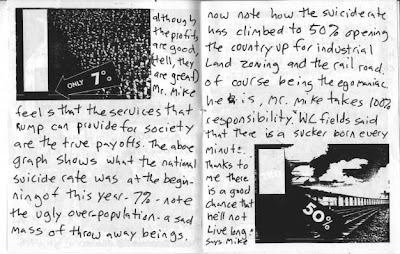 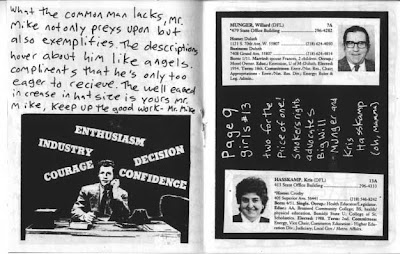 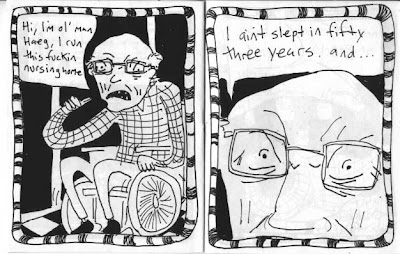 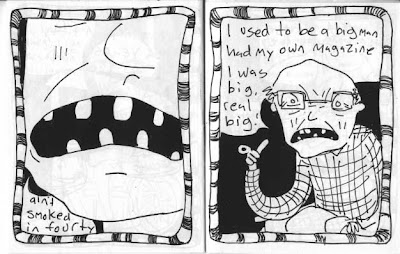 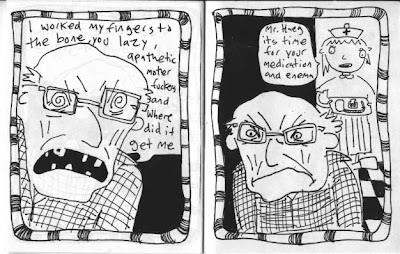 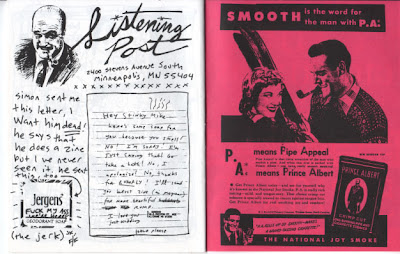 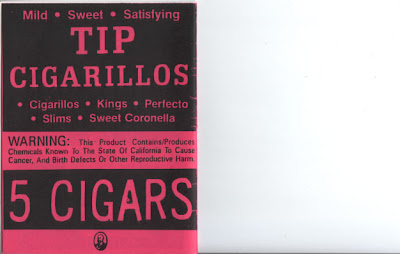 The Count of Al Dente said...

It's still one of my all-time favorites and inspired my zine, Stump.