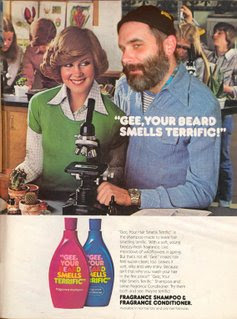 So I have a beard. I know it's a choice. But, damnit, I want to be able to eat a tuna melt or a burger slathered in BBQ sauce without having to smell it all day. I wash and scrub after every meal, but it still stinks. I just discovered that Gee Your Hair Smells Terrific! Shampoo is still on the market. Now if somebody could get me a few sample travel bottles of this amazing elixir, I'd be tickled pink.
Posted by Unknown at 12:49 PM 3 comments:

Sonething for the Touts, the Nuns, the Grocery Clerks and you

we have everything and we have nothing
and some men do it in churches
and some men do it by tearing butterflies
in half
and some men do it in Palm Springs
laying it into butterblondes
with Cadillac souls
Cadillacs and butterflies
nothing and everything,
the face melting down to the last puff
in a cellar in Corpus Christi.
there's something for the touts, the nuns,
the grocery clerks and you . . .
something at 8 a.m., something in the library
something in the river,
everything and nothing.
in the slaughterhouse it comes running along
the ceiling on a hook, and you swing it --
one
two
three
and then you've got it, $200 worth of dead
meat, its bones against your bones
something and nothing.
it's always early enough to die and
it's always too late,
and the drill of blood in the basin white
it tells you nothing at all
and the gravediggers playing poker over
5 a.m. coffee, waiting for the grass
to dismiss the frost . . .
they tell you nothing at all.

we have everything and we have nothing --
days with glass edges and the impossible stink
of river moss -- worse than shit;
checkerboard days of moves and countermoves,
fagged interest, with as much sense in defeat as
in victory; slow days like mules
humping it slagged and sullen and sun-glazed
up a road where a madman sits waiting among
bluejays and wrens netted in and sucked a flakey
grey.
good days too of wine and shouting, fights
in alleys, fat legs of women striving around
your bowels buried in moans,
the signs in bullrings like diamonds hollering
Mother Capri, violets coming out of the ground
telling you to forget the dead armies and the loves
that robbed you.
days when children say funny and brilliant things
like savages trying to send you a message through
their bodies while their bodies are still
alive enough to transmit and feel and run up
and down without locks and paychecks and
ideals and possessions and beetle-like
opinions.
days when you can cry all day long in
a green room with the door locked, days
when you can laugh at the breadman
because his legs are too long, days
of looking at hedges . . .

and nothing, and nothing, the days of
the bosses, yellow men
with bad breath and big feet, men
who look like frogs, hyenas, men who walk
as if melody had never been invented, men
who think it is intelligent to hire and fire and
profit, men with expensive wives they possess
like 60 acres of ground to be drilled
or shown-off or to be walled away from
the incompetent, men who'd kill you
because they're crazy and justify it because
it's the law, men who stand in front of
windows 30 feet wide and see nothing,
men with luxury yachts who can sail around
the world and yet never get out of their vest
pockets, men like snails, men like eels, men
like slugs, and not as good . . .
and nothing, getting your last paycheck
at a harbor, at a factory, at a hospital, at an
aircraft plant, at a penny arcade, at a
barbershop, at a job you didn't want
anyway.
income tax, sickness, servility, broken
arms, broken heads -- all the stuffing
come out like an old pillow.

we have everything and we have nothing.
some do it well enough for a while and
then give way. fame gets them or disgust
or age or lack of proper diet or ink
across the eyes or children in college
or new cars or broken backs while skiing
in Switzerland or new politics or new wives
or just natural change and decay --
the man you knew yesterday hooking
for ten rounds or drinking for three days and
three nights by the Sawtooth mountains now
just something under a sheet or a cross
or a stone or under an easy delusion,
or packing a bible or a golf bag or a
briefcase: how they go, how they go! -- all
the ones you thought would never go.

days like this. like your day today.
maybe the rain on the window trying to
get through to you. what do you see today?
what is it? where are you? the best
days are sometimes the first, sometimes
the middle and even sometimes the last.
the vacant lots are not bad, churches in
Europe on postcards are not bad. people in
wax museums frozen into their best sterility
are not bad, horrible but not bad. the
cannon, think of the cannon, and toast for
breakfast the coffee hot enough you
know your tongue is still there, three
geraniums outside a window, trying to be
red and trying to be pink and trying to be
geraniums, no wonder sometimes the women
cry, no wonder the mules don't want
to go up the hill. are you in a hotel room
in Detroit looking for a cigarette? one more
good day. a little bit of it. and as
the nurses come out of the building after
their shift, having had enough, eight nurses
with different names and different places
to go -- walking across the lawn, some of them
want cocoa and a paper, some of them want a
hot bath, some of them want a man, some
of them are hardly thinking at all. enough
and not enough. arcs and pilgrims, oranges
gutters, ferns, antibodies, boxes of
tissue paper.

in the most decent sometimes sun
there is the softsmoke feeling from urns
and the canned sound of old battleplanes
and if you go inside and run your finger
along the window ledge you'll find
dirt, maybe even earth.
and if you look out the window
there will be the day, and as you
get older you'll keep looking
keep looking
sucking your tongue in a little
ah ah no no maybe

some do it naturally
some obscenely
everywhere.

Hear him read it here>
Posted by Unknown at 7:16 AM No comments:

No Coast Craft-o-rama - This Friday and Saturday 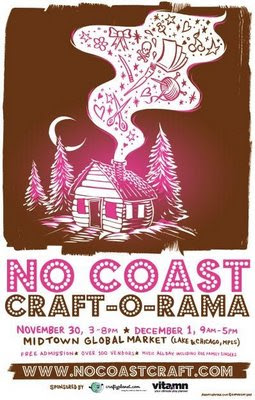 No Coast Craft-o-Rama this weekend! Link
Posted by Unknown at 8:14 AM No comments:

Merrill Womack-Christian, Pilot, Burn victim, and a hell of a tenor!

I've been a big fan of Merrill Womack since my earliest crate-digging adventures in the early 90's. A basic overview: Womack created his own religious records by overdubbing his voice 40 times to create a full male choir. He would fly himself around the West Coast to sing and promote his records. One stormy night hiss plane went down and he suffered third degree burns over his entire body. He sand thorugh the ambulance ride and subsequent skin grafting sessions. He continued to record albums, run his own company, build a recording studio empire for many years after his accident. Admittedly, I bought the first album out of novelty, but after hearing him belt out his signature tune, "Happy Again", I found hope. Not through the Jesus, but through one mans perseverance and optimism. I hope that on this first-day-back-at-work-after-a-long-holiday-weekend he can provide you the same. And Thank you WFMU blog for this link!
Posted by Unknown at 7:35 AM 4 comments: 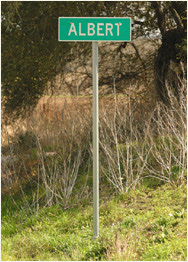 My pal, Brian sent me a notice this weekend that a small town in Texas was just sold on ebay for 3.8 million dollars to a non-disclosed Italian investor. Shame on you Albert, Texas. Or more truthfully, shame on you Bobby Cave, who turned a community into a commodity rather than plant his feet in some good earth, shaded by a 400 year old tree, and own a little piece of this earth that he could truly call his own. You can catch a glimpse of Mr. Cave in this little video.. Warning: The video is appropriately sponsored by Blackberry: The pacemaker of choice for American douchebags. He's the tool, I mean "project oriented guy" in the cashmere v-necked sweater being interviewed over a couple of Grey Goose gimlets in a posh fucking cougar hangout, probably in LA. Sorry if I seem a little bitter about this transaction, but this short sightedness that abounds in our civic planning and spoiled-child real estate market is really starting to bring me down. I'm sure Mr. Cave is no less despicable than the rest of the speculators out there who have helped move this country, it's people, and our relationships to the world and each other away from creating permanence and meaning. Thnaks Brian, and happy Monday! Long live the disposable commodity. CNN Link here.
Posted by Unknown at 6:59 AM No comments: 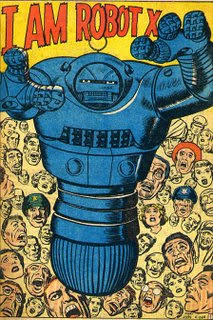 For those uninitiated, Jack Kirby was a legend in the comic book genre. He's responsible for creating many big name superheros. His brain also birthed a slew of monster comics that bent readers imaginations and furthered the plight of the everyman, in a fashion only found elsewhere in the episodes of Twilight Zone and The Outer Limits. Here, on Monster Blog, for the first time reprinted anywhere are 39 gems of Kirby magic. Enjoy. Thanks metafilter.
Posted by Unknown at 7:08 AM No comments:

I've seen Bruce Conner referred to as a Beatnik filmmaker. I first saw his work when I came across the video he did for the Brian Eno / David Byrne album, My Life in The Bush of Ghosts. The album and book by Amos Tutuola from which the title was lifted, are an amazing blend of belief and technology. Conner's video pulled from aged electronic instructional films really connects the two, delivering a very analog view and feel. One can almost feel the devout milling about as the electronic particles are manipulated by currents.

And he did stuff for Devo. Everybody wins.
Posted by Unknown at 6:42 AM 1 comment: