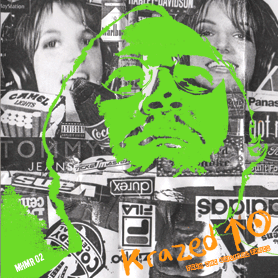 Here was this dude who looked a bit like Paul Shafer in a tie die carrying a tape case on which he had drawn a ghetto blaster and a piece of corrugated cardboard advertising "Will freestyle on any topic 25¢ " I gave him 75¢ to rap about the girl I was with, Pizza Hut, and Moby Dick which he did, flawlessly. I bought a couple of the tapes he was selling from his own label, Krazed Up Records.

More recent jams on MySpace, YES!
Posted by MayorMike at 8:53 AM