The Senster: Robotic sculpture from the late 60's

Grabbing a little free time here and there to monkey around with my Getting started with Arduino kit. Looking to start building a bit of interactivity into some of my birdhouses and knitting. Stumbled accross this video from the early 1970's of a giant responsive robot. It 'looks like much of the input for the robot was sound, which makes this silent video kind of eerie.

From Today and Tomorrow:

The Senster was a robotic sculpture developed by Edward Ihnatowicz in the late 60’s. It was commissioned by Philips and part of their permanent showplace, the Evoluon, in Eindhoven between 1970 and 1974. It was the first robotic sculpture to be controlled by a computer and could react to the behaviour of the visitors with its sound and movement sensors. The computer used to control The Senster was a Philips P9201 and had only 8K of core memory. Now, almost 40 years later, every interaction student could make something like this and fit the logic in a small box. But this is still an amazing project.

More links and images over at Today and Tomorrow

UPDATE! After this got picked up by Boing Boing, a commenter posted that The Senster still exists! The Dutch company that did the welding saved it from the scrap heap and mounted it on cement blocks outside their building. It's almost more eerie sitting alons and dormant there in the field. I wonder if it could be reactivated?

Here's the translation from The Senster Today where you will find another couple of photos. 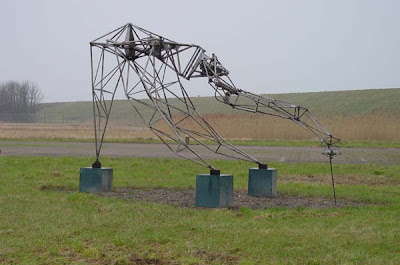 Actually, it WAS revived by a couple of students from Utrecht. I have seen pictures of their 1:5 or so scale model, which was controlled using model RC servo's.

I'm trying to collect enough information to do the same (with maybe better mechanics :-) so if there is anyone who has more info, especially dimensioned drawings, that would be great.